Christmas Day near Montego Bay, we saw a great reggae concert with Marcia Griffiths (above), Gregory Isaacs, John Holt, and others.

In our hotel room, a lizard perched on Amanda's running shoe.

Next I drove our rental car across the north coast to Port Antonio (the roads were insane!).

Winnifred Beach, one of several beaches just east of the place we stayed.

A drip formation in the same caves.

The view from Athenry Gardens, just outside the caves, a few miles above Port Antonio.

The Blue Lagoon - we swam in the mildly salty waters, which had a mixture of warm and cold currents.

Boston Beach is known throughout Jamaica, partly for its jerk chicken and pork (sold at this shack)...

...and partly for its surfing.

On a hike in the Rio Grande Valley (inland from Port Antonio):  coconuts (center), plantains (right), and bananas (left, farther back) grow together.

A giant stand of bamboo in front of Scatter Falls.

Bamboo in one of my favorite types of pictures:  I call them skyshots.

Another example, with a tree fern on the right.

These kids put their ingenuity to work building a truck.

A strikingly blue bird in a papaya tree.  The last 7 pictures are all from the same hike.

We rafted down the Rio Grande.  Each bamboo raft has a captain who steers with a pole.

Woody's place, where we ate three times.  Highlights for me were the homemade ginger ale (very strong), the milkshakes, and the extra-friendly proprietors.

Now we have journeyed high into the Blue Mountains.  Amanda at sunset.

We visited a coffee farmer and bought some of these freshly roasted beans.

Amanda and I hiked up to Blue Mountain Peak in the dark (with a guide), but sunrise was too foggy for a view.  Down lower we had nicer views.

Now we're in Kingston on New Year's Eve.  From our hotel in the hills, we saw fireworks all over town.

The same view by day.  The hotel had a slightly worndown elegance to it. 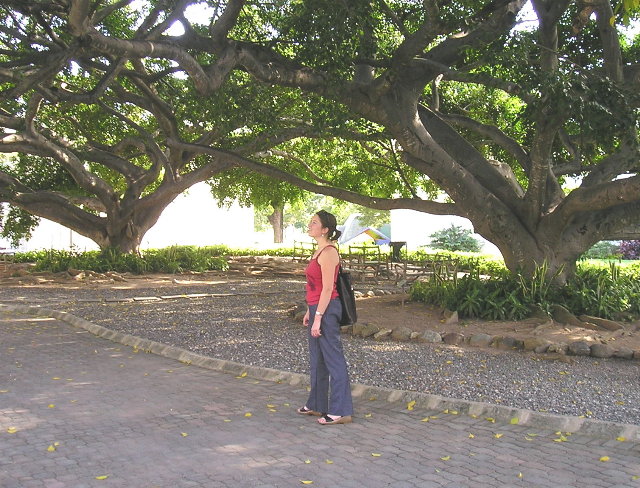 Amanda walks under a leafy canopy at the University of the West Indies. 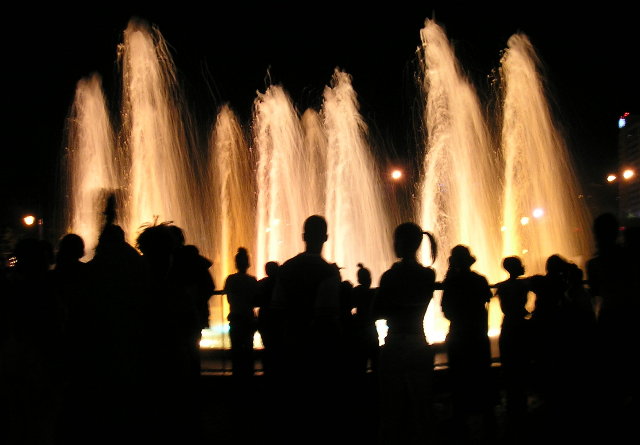 This park in New Kingston attracted lots of people at night. 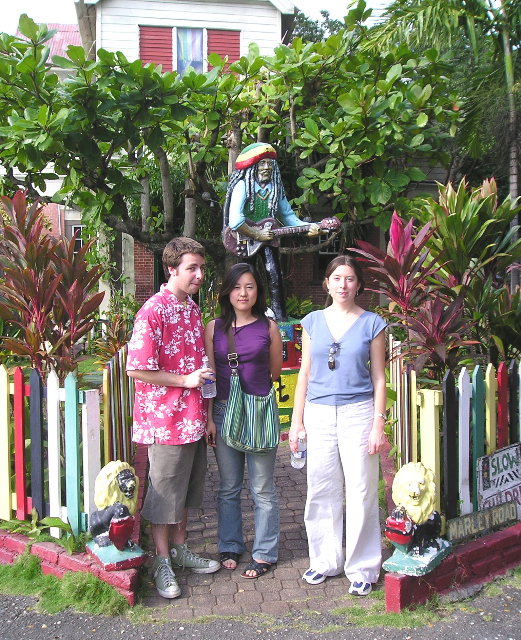 We had a wonderful meal at Norma's on the Terrace in Kingston.  Amanda was thrilled to try jerk tofu. 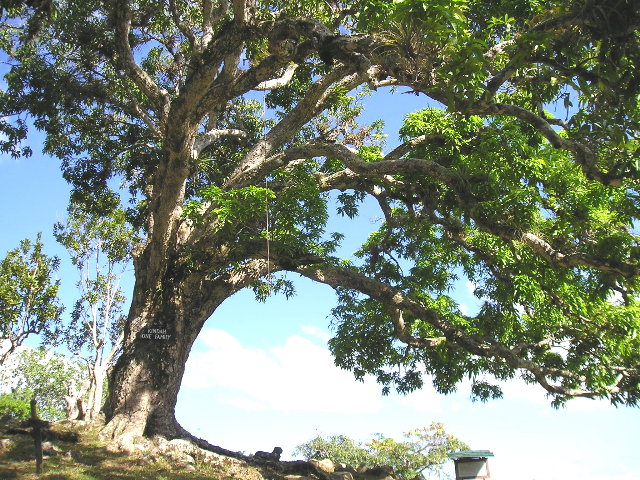 The Kindah (One Family) Tree in Accompong, a village of the Maroons (descendents of freed slaves). 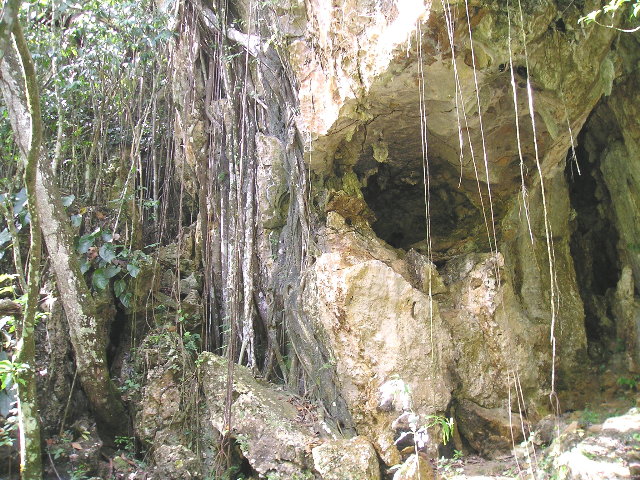 Caves where the Maroons would hide to evade the British. 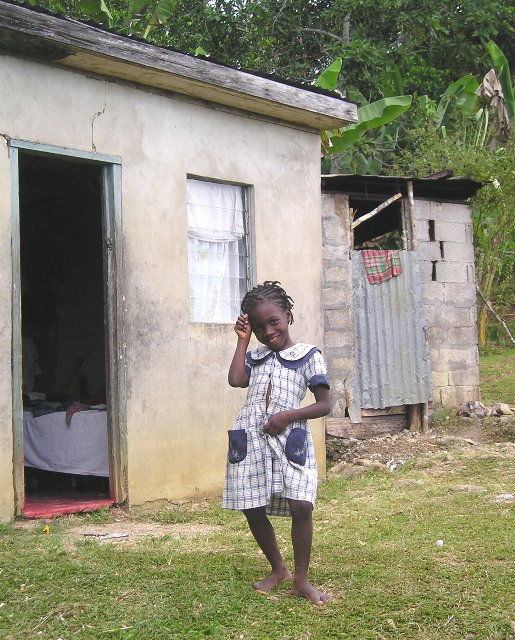 This girl, named Amanda, came out of her house and requested that I take her picture. 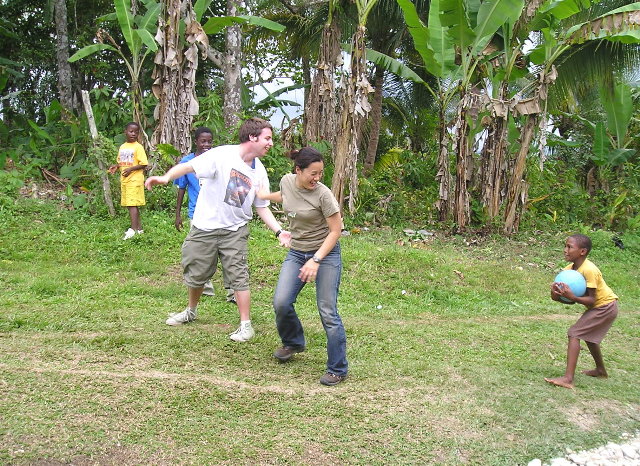 Playing "monkey in the middle" with the kids. 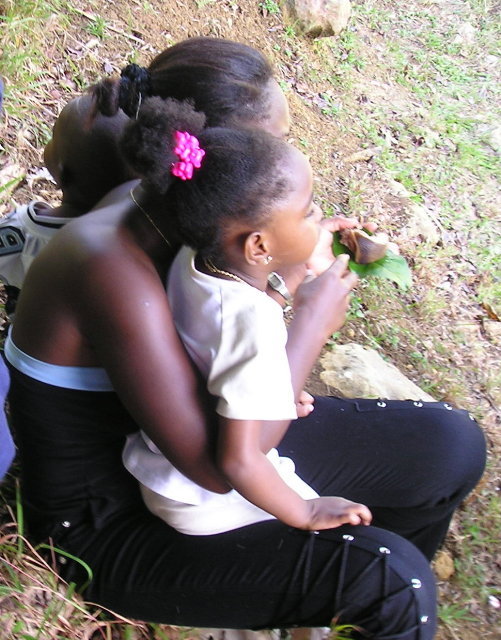 Mother and daughter share a ceremonial meal of pork on Cudjoe Day, a big festival honoring the Maroon leader who fought and made peace with the British. 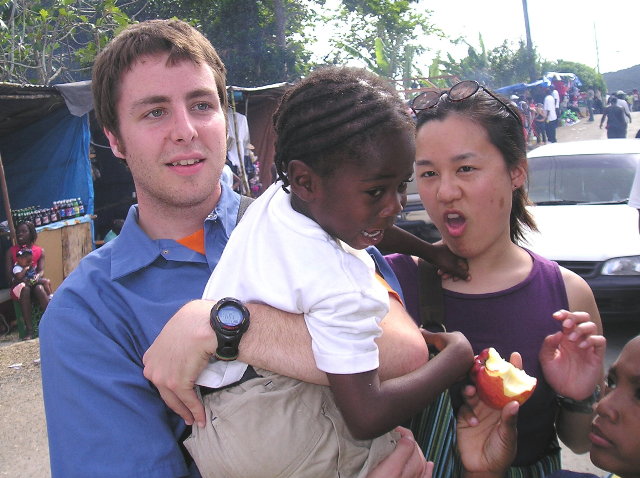 Justin and Mayumi with Chico, an energetic kid who ran shoeless (by choice) all over town. 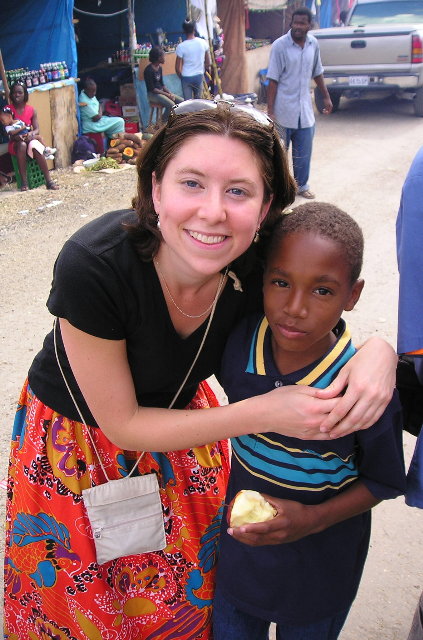 Amanda with Chase, a smart boy who spent a lot of time around us. 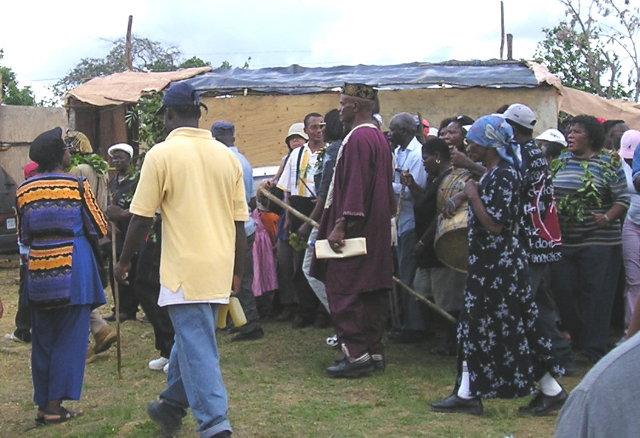 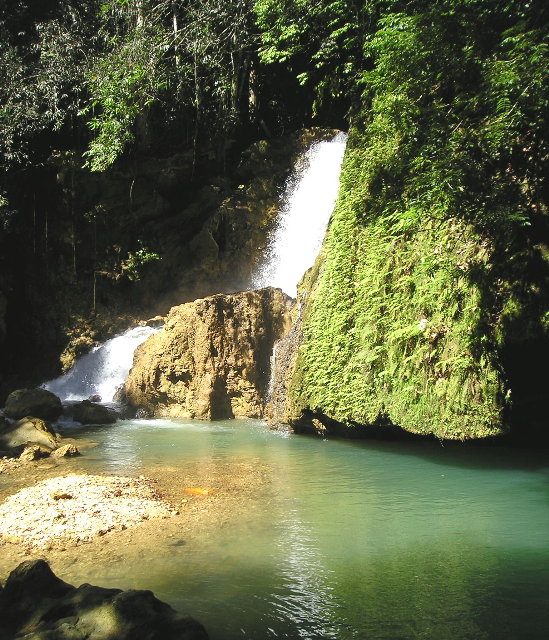 Not far from Accompong, the beautiful YS Falls. 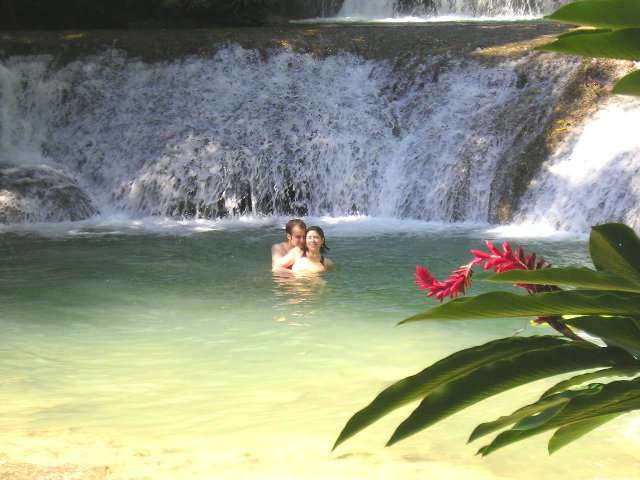 Amanda and I swim between two sets of falls. 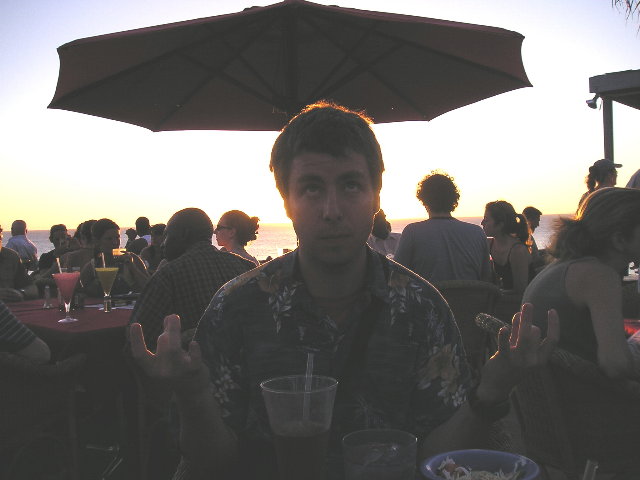 Our last night in Jamaica, we watched a sunset in Negril.  Here Justin makes the most of his halo of light. 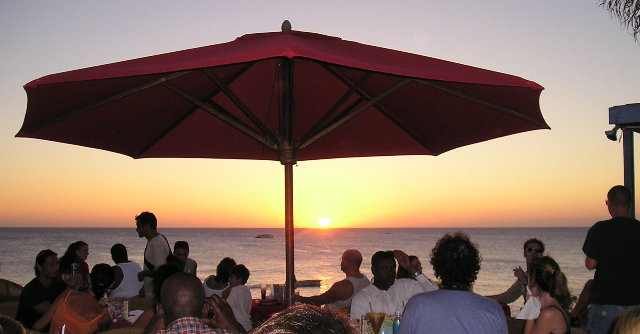 Early sunset from our table at Rick's Cafe.  It seemed like a cloudless touchdown. 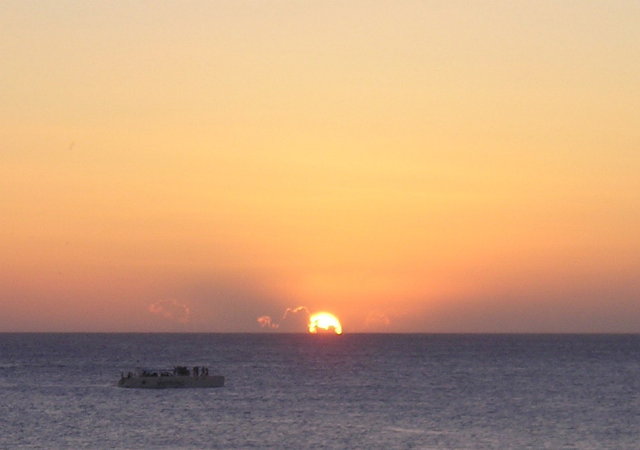 But then some clouds on the horizon made for a most interesting sunset. 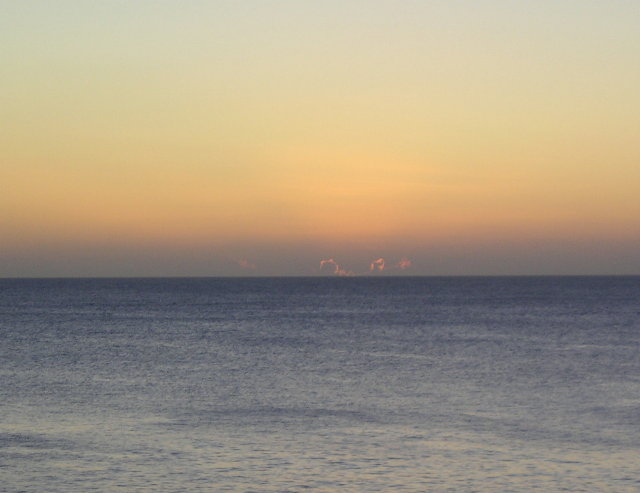 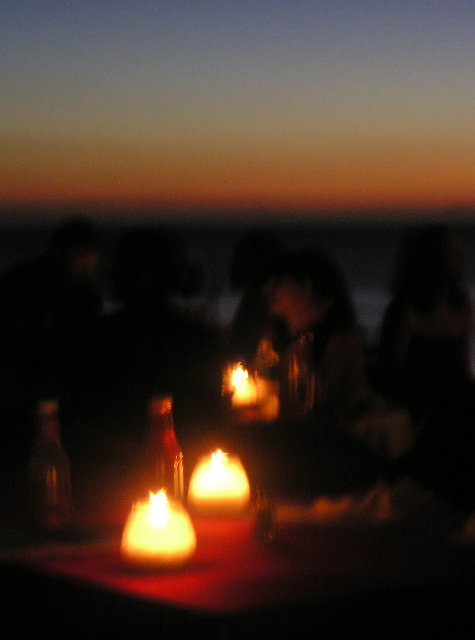